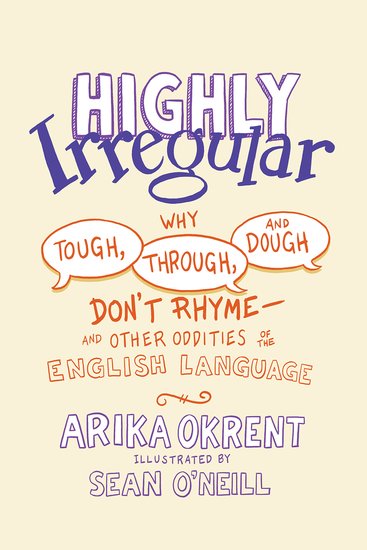 HIGHLY IRREGULAR: Why Tough, Through, and Dough Don’t Rhyme and Other Oddities of the English Language

English can be so illogical and frustrating. Ugh, English, why are you like this?

Maybe you’ve resigned yourself to the idea that all we can do is shrug. That’s just how it it is. But there is an explanation, and this book is here to help.

Highly Irregular takes on the weirdness of English with clear, playfully illustrated answers to a range of questions about its quirks. At the same time, it’s a deeper history of English and how we made it the way it is.

In the Land of Invented Languages was published in 2009. Highly Irregular was released July 2021. 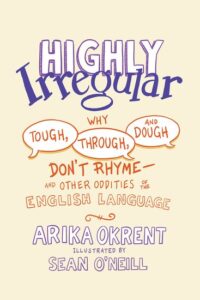 The weirdness of English, explained. Now available for pre-order at OUP, Bookshop, and Amazon 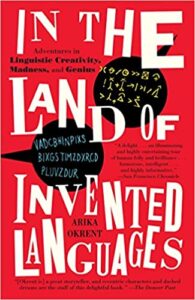 The history of the human impulse to build a better language. Book site with excerpts, language examples and sortable lists of languages at inthelandofinventedlanguages.com

Articles at other places:

I produced a bunch of of videos for Mental Floss with Sean O’Neill that you can see on my YouTube channel. These are some of my favorites.

What causes a foreign accent?

Why do animals make different sounds in different languages?

The story of the umlaut

How do we know how languages are related?

I collaborated with Julie Hochgesang, professor of Linguistics at Gallaudet University, on this video about how sign languages have accents

Ya wanna read my dissertation? Have at it!

Arika Okrent was born in Chicago and became fascinated with languages at an early age. She flitted from language to language in school, wondering why she couldn’t just settle down and commit to one, until she finally discovered a field that would support and encourage her scandalous behavior: Linguistics. After some lengthy affairs with Hungarian (she taught in Hungary after college) and American Sign Language (she earned an M.A. in Linguistics from Gallaudet, the world’s only university for the Deaf), she began a Ph.D. program at the University of Chicago, where she fell hard for Psycholinguistics. She first worked in a gesture research lab, and later took up with a brain research lab, where she conducted the experiments that would earn her a degree in 2004. By that time she had begun to spend long afternoons with the languages that even linguists think they’re too good for — the artificial languages, losers like Esperanto and Klingon. Initial feelings of pity and revulsion gave way to fascination and affection, and she embarked on a whirlwind romance with the history of invented languages. The love child of this passion is her 2009 book In the Land of Invented Languages.

She began writing about language for a popular audience and worked as a contributing editor at Mental Floss where she developed her style of smart, shareable language content. In 2016, she won the Linguistic Journalism Award from the Linguistic Society of America. She also began collaborating with illustrator Sean O’Neill on a series of whiteboard videos about language. That collaboration led to her latest book, Highly Irregular, an illustrated history of English as told through the question of why it’s so weird.

Her Erdős-Bacon number is 11. A paper she co-authored with Howard Nusbaum gets an Erdős 8 (>Strogatz (3)> Arbesman>Vitevitch>Pisoni>Nusbaum) and a film she appeared in about conlanging with Jason Momoa gets her to Bacon 3. She did not actually meet Jason Momoa, but one time her urban planner dad gave Kevin Bacon’s urban planner dad a ride, so she also has a “personally met” Bacon number 3.

In 2013 she won the American Copy Editors Society’s National Grammar Day contest for best tweeted haiku. From the announcement by Mark Allen:

Arika Okrent tapped into a universal feeling of realization and dread when she wrote her winning entry for the 2013 National Grammar Day Tweeted Haiku Contest:

Soon after, she tweeted an amendment:

“It became a self-fulfilling haiku,” Okrent said. “I wish I could say I planned it that way.”